The filter body is protected with a durable electrostatically-applied powder coating for superior corrosion resistance. The spin-on filter design is simple to service and features a reusable clear engineering plastic or metal contaminant collection bowl with a self-venting drain for draining out collected contaminants and water.

All Spin-on Series marine replacement cartridge filter elements utilize Racor’s high-efficiency Aquabloc® engineered media. Aquabloc® is a blend of high-grade cellulose compounded with resins and a special chemical treatment. It incorporates pleat-spacing corrugations and a graduated pore structure to increase dirt-holding capacity and extend filter life. The media is waterproof and rustproof, capturing contaminants while the specially treated surface separates and coalesces water from the fuel, which causes the water to gather into large droplets that then fall into the fuel filter’s collection bowl.

Aquabloc® elements repel water and remove solid contaminants from fuel at 98% efficiency of their micron rating. To meet the unique requirements of customers’ engines, three different micron rating cartridges are available for purchase, including:

Racor Diesel Spin-on Series marine filter elements use Aquabloc® media to reliably remove dirt and water from diesel and gasoline. Aquabloc® media is pleated, corrugated, and designed for high water rejection and long service life. Fuel entering the filter head is diverted downward past the vertical media pleats, allowing larger water droplets and contamination particles to fall directly to the collection bowl. Smaller water droplets converge and coalesce on the specially treated media surface until they are large enough to also drop to the collection bowl. Small contamination particles are stopped at the surface of the Aquabloc® media, while even smaller particles are held deeper in its layers.

Clear bowls are a fuel system inspection item: Inspect for damage, deformation, and discoloration often, and replace as necessary.

Offers exceptional removal of water that enters the system through condensation in the fuel tank. Any water present in the fuel stream will support bacterial growth, which can cause clogged filters and result in the formation of corrosive acids. Susceptible components then rust and corrode, leading to erosion and wear of critical fuel system components.\

There are no reviews yet. 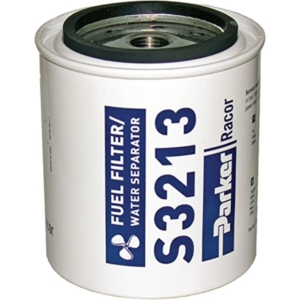 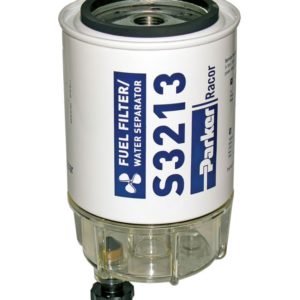 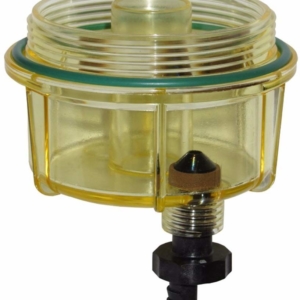